On Friday and Saturday, July 31-August 1, the Holy Land Christian Ecumenical Foundation (HCEF) held its 4th International Palestinian Diaspora Banquet and Conference in the Convention Palace in Bethlehem. Hundreds of youth and leaders in cities throughout Palestine gathered alongside 40 Know Thy Heritage (KTH) Palestinian delegates who hail from 10 different countries in the diaspora in order to discuss everything from human rights violations, the role of Palestinian women in capacity building, the Palestinian economy, the diaspora youth’s role in nation-building, and so much more. 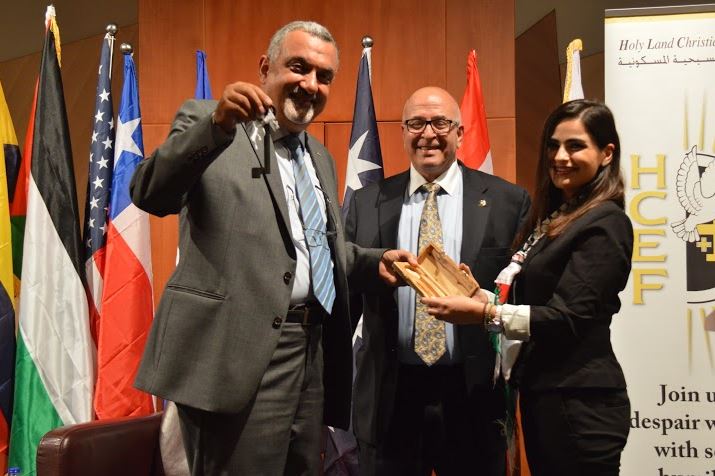 The opening ceremony of banquet and conference gave delegates the opportunity to meet with local and international leaders and their peers, and to have the privilege of hearing their fellow delegates speak along with a speech by H.E. Ziad Bandak, Advisor to the President for Christian Relations. 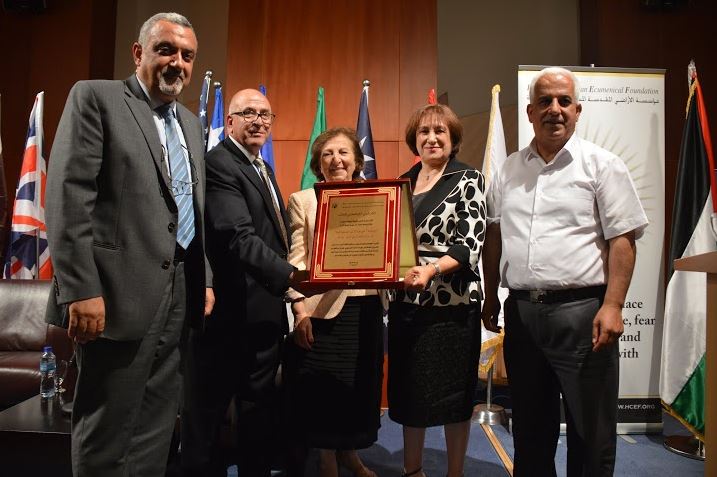 Also, during banquet HCEF Launched a new award called “Upon This Land,” named after a Mahmoud Darwish poem that will be given annually to honor an individual or organization that contributes significantly to the preservation of Palestinian heritage and culture. This year it was awarded to the Arab Women’s Union for its constant effort to create jobs for Palestinian women through culture and heritage projects, most notably and recently the Bethlehem Museum, which was completed in partnership with HCEF at the beginning of 2015. 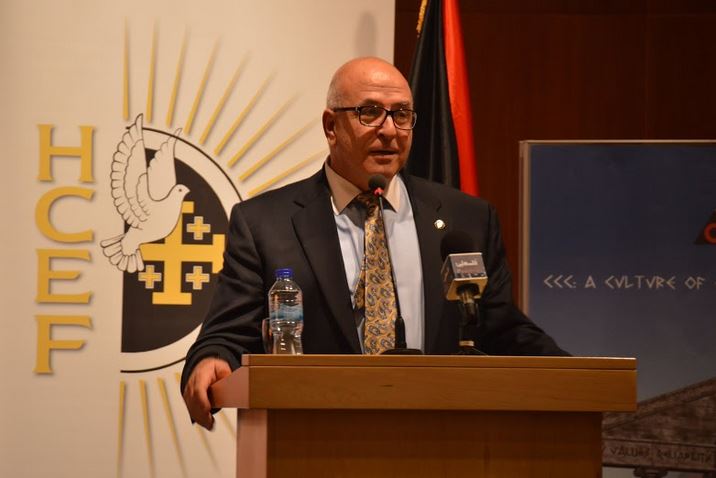 The conference began Saturday morning with welcoming remarks by HCEF President & CEO Sir Rateb Rabie, KCHS, who said, “It is beautiful to see Palestinians — both from the diaspora and the homeland — coming together to bridge their past with their common future, and to be part of the nation-building which will empower all of us to manifest a thriving Palestinian State.” 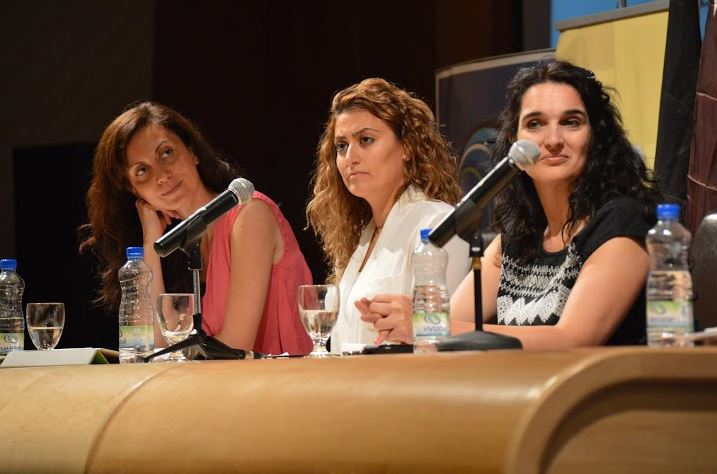 Both representatives from Al-Haq, Palestine’s oldest human rights organization, detailed the various ways in which Israeli companies have exploited the occupation for profit and at the expense of human rights. According to Farah, the lack of international accountability only perpetuates such actions. 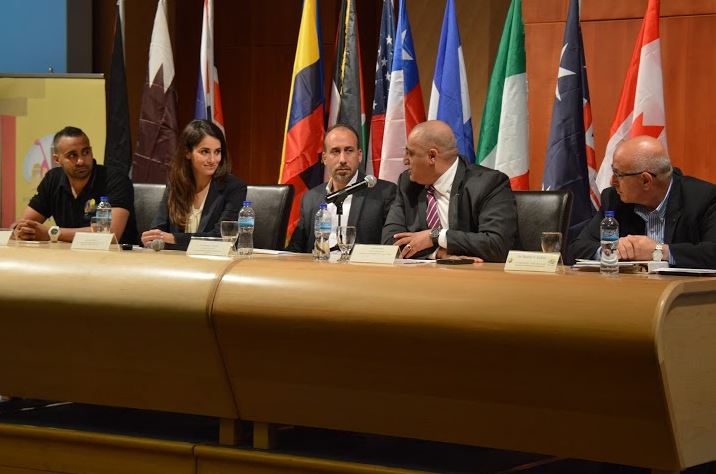 ¨International institutions are only relevant so long as state actors are held accountable for their actions,” Farah said. “This is our challenge with Israel.¨ The second panel, which focused on the newest component of the KTH delegation called the Future Business Leaders (FBL) program, highlighted the role that the diaspora can play in building the Palestinian economy. The panel included Raya Sbitany, Head of Business Development for the Bank of Palestine; Mohammad Nuseibeh, Deputy Team Leader for the Palestinian Market Development Programme (PMDP); Haythan Wahidi, CEO of Palestinian Investment Promotion Agency (PIPA); and Fareed Zakaria*, a KTH delegate from Australia whose family is originally from Nablus. All of the panelists highlighted the integral role that Palestinians in the diaspora can play as ambassadors for Palestine abroad.

¨There are 7.5 million Palestinians in the diaspora,” Bank of Palestine representative Raya Sbitany said. “By meeting successful Palestinians abroad and linking them, we can do so much.

¨ Zakaria highlighted how the economic relationship between Palestine and the diaspora is changing.

¨We [Palestinians] in the diaspora want to move beyond charitable organizations,” Zakaria said. “We are trying to support the Palestinian cause by creating tangible connections —- through investments, job creation and sustainable partnerships. We are an international people, so we need to think as an international economy.¨ 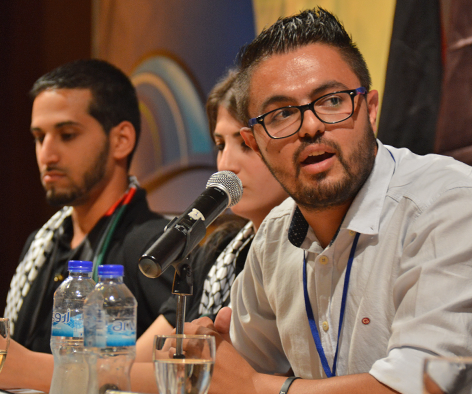 Yidi discussed the identity crisis faced by Palestinians in the diaspora and the importance of remembering ones´ roots.

¨Maybe we´ve never tasted Jaffa oranges before, but we know how sweet they are,¨ she said.

The fourth and final panel, entitled “The Role of Palestinian Women in Capacity Building,” featured four women panelists from a variety of organizations and institutions to discuss the role of women in Palestinian society and the ways in which they can be further empowered by men and women alike. The panelists included Amal Masri, Ougarit Group CEO and Middle East Business News and Magazine Editor-in-Chief; Rula Shoki, a lecturer at Bethlehem University; Noor Shayeb, a KTH delegate from the United States whose family is originally from Jenin; and Amber Amleh, the COO of Ibtikar Fund L.P.

To Masri, the answer to elevating the role of women in Palestinian society lies in entrepreneurship.

¨One way to empower women is to become social entrepreneurs, and to have a bigger heart to give back to others,¨ Masri said.

Shayeb emphasized the importance of solidarity between Palestinian women — both within Palestine and abroad.

¨This delegation is approximately 70 percent women, which is very significant because we want to empower and lead the future of women in Palestine with you,” she said. “We want to work together and bring your stories to the forefront.¨

At the conclusion of the conference, and in honor of the KTH delegates and speakers who made it possible, each of them were presented with a symbolic Key of Return, gifted in olive wood boxes engraved with their names. 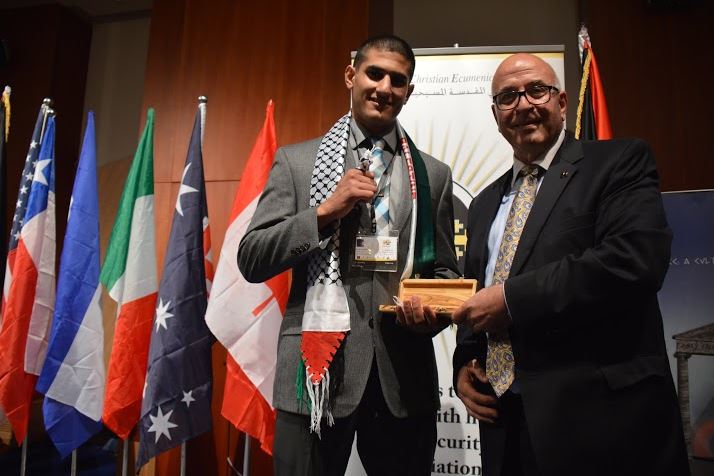 In all, the conference had intellectually and emotionally challenging topics that helped to produce ideas among participants for manifesting a free and prosperous Palestine.

*Name has been changed.