Bethlehem Sets the Stage for a Warm Welcome Home 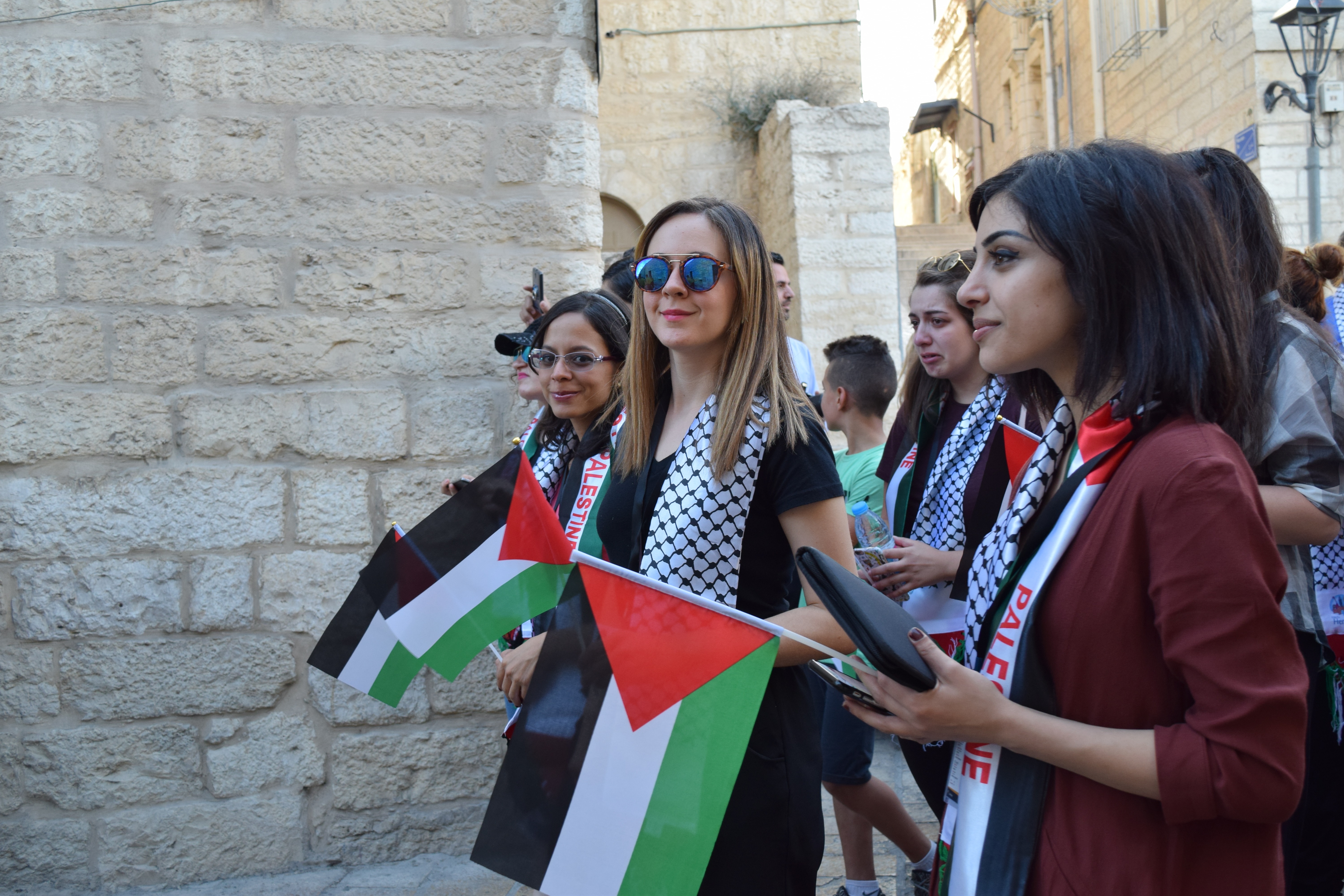 Bethlehem, Palestine– After a long and arduous journey crossing the border of Amman, the Holy Land Christian Ecumenical Foundation (HCEF)’s 6th annual Know Thy Heritage (KTH) delegation was received by the entire city in an emotional commemoration ceremony in Manger Square, Bethlehem, Palestine. This year’s delegation of diaspora Palestinians found the warm welcome a stark contrast to the cold reality of crossing the bridge into Palestine.

“I thought the crossing was going to be a scary experience, but my fear turned into sadness” shared delegate Juliet K., from Maine, USA, as she reflected on her experience crossing into Palestine.

After a lengthy eight hours, the cruel nature of the border crossing at the King Hussein Bridge gave the diaspora delegates a small taste of what Palestinians face every day in their homeland. Many questioned why it was that Palestinians should be interrogated when entering their own home.  This experience left a powerful impact on the delegates as they began their journey to discover their roots.

Upon arrival into the town of Bethlehem, delegates were handed Palestinian flags and processed down Star Street, the traditional entrance into the old city of Bethlehem, accompanied by local scout troupes and a marching band. They marched from the Catholic Action Center to Manger Square, with music and fanfare, waving their flags and greeting onlookers who lined the streets.

The sounds of the marching band filled the air as the delegates entered Manger Square where they were received with a warm reception by the Bethlehem community. The delegates were welcomed by the kind words of H.E. Rula Ma’ayah, Minister of Tourism and Antiquities, H.E. Fuad Salem, General Director of the Governorate of Bethlehem, H.E. Vera Baboun, Mayor of Bethlehem, His Eminence the Most Reverend Archbishop “Atallah” Hanna, Archbishop of Sebastia, Greek Orthodox Patriarchate of Jerusalem, and HCEF President and CEO, Sir Rateb Rabie, KCHS.

Many of the delegate’s eyes were filled with wonderment and gratitude, as tears of joy streamed down their faces. “I never would have thought I would be walking on the same streets as my grandfather,” admitted Raimundo M., of Santiago, Chile. Walking down the ancient, stone streets of their ancestors, is just one of the special moments that will be had during this year’s KTH journey.

This year’s journey will be the 6th generation of delegates welcomed into Bethlehem. The celebration and reception was held under the Auspices of Her Excellency Rula Ma’ayah, Minister of Tourism and Antiquities.

Accompany the 2016 KTH Delegation by following us on: