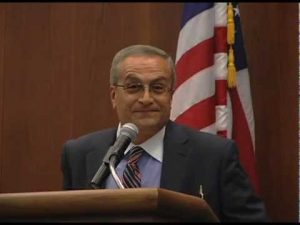 Dr. Burhan Ghanayem was born in Palestine and received his Bachelor of Science degree in Pharmacy from Cairo University and was a pharmacist in Kuwait for two years. Dr. Ghanayem immigrated to the United States and attended the University of Texas Medical Branch (Galveston) and received his PHD in Environmental Pharmacology and Toxicology.  Dr. Ghanayem joined the National Institutes of Health (NIH), National Institute of Environmental Health Sciences, RTP, NC as a Research Fellow.  Dr. Ghanayem retired from the NIH to become an entrepreneur and established multiple real estate and retail businesses.

Dr. Ghanayem is an active volunteer and supporter of many organizations with emphasis on peace with justice in Palestine and was a co-founder of the North Carolina chapter of the American Arab Anti-discrimination Committee (ADC) and instrumental in the establishments of Diabetes Institutes by the Jerusalem Fund in Occupied Palestine. Dr. Ghanayem currently serves on the board of directors of the Coalition for Peace with Justice (CPWJ), the Abrahamic Interfaith Initiative on the Middle East (AIME), and the Muslim American Public Affairs Council (MAPAC).

He is married and has 2 daughters and one son.