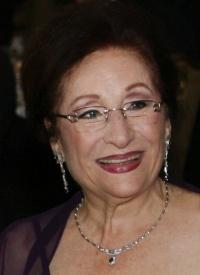 Dr. Khelil received Doctorate degree in Nuclear Physics from North Texas State University, Denton, Texas where she was the first woman to get such a degree in the state of Texas.

Currently Dr. Khelil serves on the Board of Directors of the United Palestinian Appeal (UPA), and is the Chairperson of the National Arab American Women’s Association (NAAWA),

As president of the Arab Women’s Council Research and Education Fund, she three times led groups of American high school students on trips to different countries in the Middle East in an effort to get them to understand the Palestinian Question.    As the President of ROOTS the Palestine Youth Organization, she was involved in organizing annual trips for Palestinian American youth to visit Palestine,   Also ROOTS organized an annual summer camp for Palestinian and Arab American Youth where the councilors conducted workshops in teaching, Arabic, brief background of the history of the region, and Debka.

Dr. Khelil was listed twice in Marquis “Who’s Who of American Women” and Who’s Who in the Arab-American Community.  She was the recipient of Life Time Achievement Award by the American Task Force on Palestine as well as” Honoree of the Palestinian American Community” awarded by the General Delegation of the PLO to the United States.  Dr. Khelil is married with two children and seven grandchildren.