Palestine is in the Heart: Our last days together in Palestine

Home > Delegates 2018 Reflections > Palestine is in the Heart: Our last days together in Palestine

Today’s Palestine adventure was unlike any other, because the delegates we’re going to spend an over-night trip in the Northern part of occupied Palestine. This part of ‘Israel’ is referred to as 1948 Palestine, as it is the land that was occupied during the horrible events of the Nakba in 1948. As they were leaving the West bank, the delegates did not know what to expect from this journey. Once crossed over into 1948 Palestine, the team began to quickly notice the copious amounts of water and electricity that the residents in this occupied area have fast access too. It was alarming and upsetting since just a few meters across the checkpoint, Palestinian families are have extremely limited access to water each week and are restricted to a specific amount of voltage for each household.

After a lengthily yet scenic drive, the KTH team finally arrived at the historical land site and once-standing village of Iqruit. The warm welcome and delicious lunch that was prepared by a Palestinian family with a long lineage in Iqruit, truly displayed the gracious Palestinian hospitality. The delegates were informed that the whole village of Iqruit was destroyed by the occupation and the only standing building was the church. This church has been maintained and kept by some Palestinian families as a way to preserve Iqruit’s rich heritage. Although the delegates were overwhelmed by the unfortunate stories of how the village of Iqruit and its people were victim of war, the resilience, perseverance and kindness that the hosts displayed were incredibly uplifting and inspiring to the young Palestinian leaders. The team took one last look of the beautiful green landscape amidst the village of Iqruit and said our farewells as we headed back to the bus to make our way to the beautiful costal city of Akka.

Immediately upon arrival in Akka it was abundantly clear why this city was known as the ‘Bride of Palestine.’ The Mediterranean Sea glistened under the glowing Palestinian sun as the waves crashed against the huge castle-like structures that lined the cost with restaurants, hotels, ship ports and antique shops. The team toured around the picturesque city and some delegates decided to roll up our pants and jump into the fresh salt water of the beautiful Mediterranean beaches, while others relaxed and sunbathed on top of the soft white sand. After eating a delicious lunch, the team headed back onto the bus to make it to the historic city of Nazareth, where they would spend a night in a cozy hotel. In Nazareth the team had a lovely dinner and returned to their rooms to rest after a long day of exploration.

The team woke up in Nazareth knowing today was going to be our last complete day together in Palestine. We started our day bright and early and excited to see more of the ‘48 territories. We could not leave Nazareth without visiting the Basilica of the Annunciation, where Virgin Mary was told by archangel St. Gabriel that she was going to be pregnant with the son of God. The basilica itself is huge, and right in the middle is the place where Virgin Mary lived. We walked around, amazed by the amount of pilgrimage tours from around the world that make the trip to experience this. The old city of Nazareth was just waking up as we made our way to the White Mosque, making a few stops in the shops between the basilica and mosque, and interacting with sellers who got excited when we told them we were Palestinian.

At the White Mosque we were welcomed and while some prayed, others explored and listened to the history of the mosque. Sadly, we only had an hour left in this intriguing city, and so we set off to find some coffee before heading to the bus. We were lucky to find two quaint shops near the mosque where we hung out and learned about the initiatives of Palestinians living in Israel to maintain their culture and heritage and to revive the Old City if Nazareth to become a hub of culture. We departed Nazareth feeling like we could have stayed longer, but eager to see the city of Haifa.

When we arrived, our tour guide welcomed us with a huge smile and led us to the Baha’i Hanging Gardens of Haifa, the holiest site in the Baha’i faith. Its beauty and grandiose presence left us all in awe, but our stomachs were grumbling. We headed to ‘Wadi Nisnas’ for what locals said is the best falafel in the area. We ate these sandwiches on the side of the sidewalk, with our guide telling us about the lives of Palestinians in 1948 territories. We walked around the streets of Haifa for a couple of hours, asking questions and making stops, learning more about the structural changes the city has gone through across the years, and about the way Palestinians in Israel continue fighting for their country.

While our time in the north was short, it was eye-opening and insightful. We headed back to Birzeit, got ready for our farewell party, and spent the night eating, listening to Arab music, dancing, talking about the past ten days and enjoying our last night together. Living and exploring Palestine left a mark in our lives, and that night we came together as a group we realized that mark was going to be there forever. 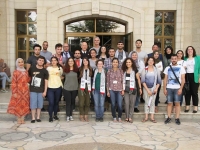 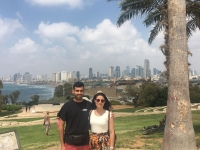 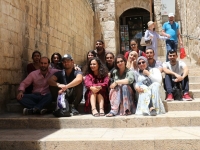 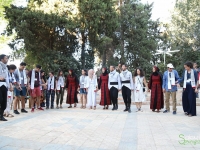 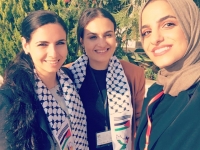 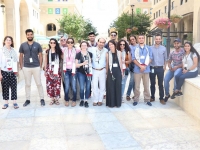 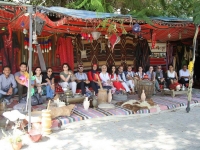 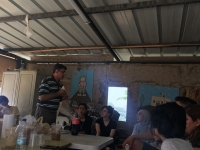 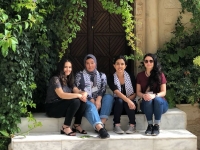 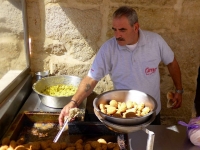