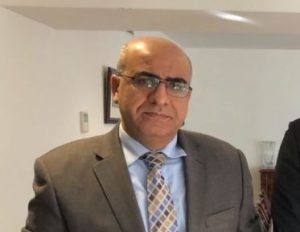 Shaher Awawdeh, a native of Palestine, served as Head of Palestine Department at the OIC (The Organisation of Islamic Cooperation) Headquarters where he handled the file of the Arab-Israeli conflict between 2001-2013. During his service at the OIC Headquarters, he participated in several needs-assessment missions to a number of OIC Member States. He also headed and participated in numerous election monitoring missions in several OIC countries.

Prior to joining the OIC, he served at the Orient House in occupied East Jerusalem (1993-2001) as protocol officer, head of protocol before becoming political assistant to the late Faisal Husseini (head of the Palestinian delegation to the Middle East Peace Talks). While in Jerusalem, he also worked as public relations officer at the Palestinian Human Rights Monitoring Group.

He has co-founded and worked to build a number of local institutions that deal with world affairs such as the Palestinian Council of Young Political Leaders, the Civic Forum Institute, the Institute for Middle East Studies-Canada in London ON, and the Centre for Discourse, Diversity, and Engagement, (in the making), London, ON.

He holds PhD in Middle East politics from the University of Exeter-UK.  He is married and blessed with five boys.